Red gurnard are a major bycatch of inshore trawl fisheries in most areas of New Zealand, including fisheries for red cod in the southern regions and flatfish on the west coast of the South Island and in Tasman Bay. They are also directly targeted in some areas (e.g. GUR 2). Red gurnard is a minor bycatch in the jack mackerel trawl fishery in the South Taranaki Bight.

Red gurnard is, by virtue of its wide distribution in harbours and shallow coastal waters, an important recreational species. It is often taken by fishers targeting snapper and tarakihi, particularly around the North Island.

Assessments are undertaken for each species according to multiple ‘units of assessment’ (UoAs). The UoA is a combination of target species/stock and the gear type used by the fishery. Each UoA is assessed against three components for target species, bycatch and ecosystems, and management systems. Each component has a number of performance indicators, which have associated criteria, scoring issues, and scoring guideposts. For each UoA, each performance indicator is assigned a risk score according to how well the fishery performs against the scoring guideposts. The summary of risk scores by UoA is presented in the table below.

All risk assessments are conducted by an independent third party. The process only takes a few days and includes opportunities for management groups and the government to provide input and peer review. 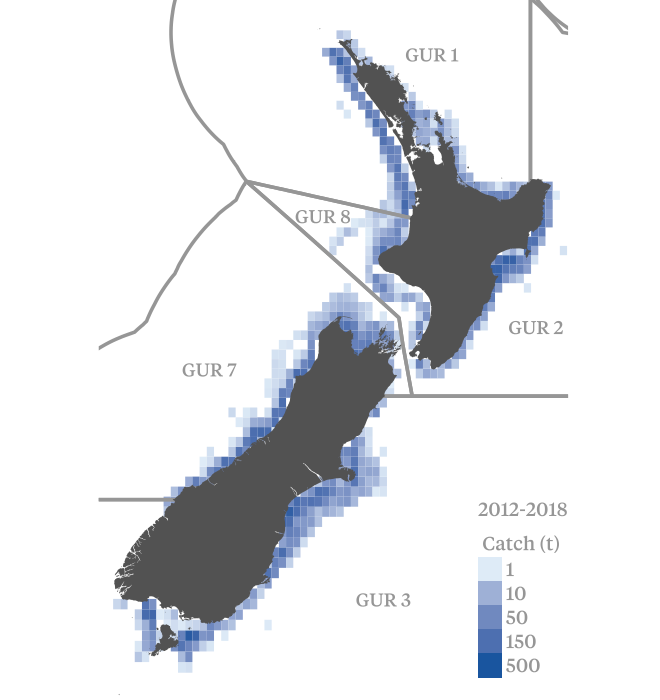 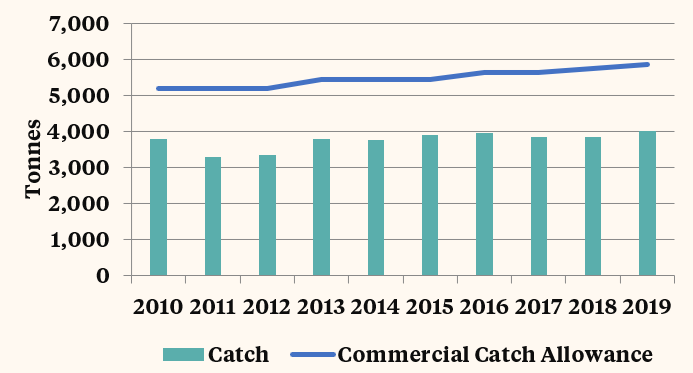 Each stock was assessed against stock-specific reference points consistent with the Harvest Strategy Standard.  The Ministry for Primary Industries concluded that each stock was as likely to be above the target reference point, and unlikely to be below the soft and hard limits.  Given the above, the combined stock appears highly likely to be above the point of recruitment impairment and fluctuating at or around levels consistent with the Maximum Sustainable Yield.

New Zealand’s inshore trawl fisheries are complex, multi-species fisheries, harvesting a wide range of inshore finfish species.  The composition of the catch can vary considerably in space and time based on variations in recruitment, changes in market demand, and the like.  Information on the retained portion of the catch is very strong, reported, and verified through the QMS reporting arrangements.  For some stocks, this is sufficient to assess the impact of the fishery on the main other species with respect to status and detect any increase in risk.  However, the available quantitative information is not sufficient in all cases.

Information on the discarded portion of the catch is limited.  Observer coverage in inshore fisheries has historically been very low (or absent from some sectors), and the main information on overall catch composition comes from independent trawl surveys, which may not be an accurate reflection of commercial catch composition (for example different gear may be used).  There is also limited reporting of discards in commercial catch returns. Given the absence of discard information for all sectors, it is not possible to assess impacts and the fishery has been assessed as precautionary high risk.  The introduction of electronic monitoring in some sectors may help to better characterise discards.

Risks to seabirds associated with New Zealand’s commercial fisheries have been assessed through a hierarchical series of risk assessments. In the most recent assessment, only one species of seabird, black petrel, had a median risk ratio higher than 1 (or upper 95% confidence limit higher than 2).  For all other species, current rates of fishing-related mortality were not expected to hinder the achievement of management targets (i.e. the risk ratio was <1).   The specific contribution of inshore trawl fisheries to black petrel potential fatalities is not known, but the total estimated captures in trawl fisheries represent a small fraction of the overall estimated captures for black petrel.  Based on rates of observer coverage, it is estimated that between 400 – 600 seabirds are captured in New Zealand’s inshore trawl fisheries each year. There is also evidence from the most recent risk assessment that risk to black petrel has declined since the introduction of the current National Plan of Action - Seabirds in 2013.  Accordingly, the direct effects of the inshore trawl fisheries appear highly unlikely to hinder the recovery of ETP seabird species.

With regards to Hector's and Maui dolphin, given the very low median estimates of annual fatalities in the trawl sector, it is unlikely that the trawl fishery will hinder the recovery of either species. However, given the preliminary estimates of risk for common dolphins, including the possibility that the risk ratio from commercial fishing may be up to twice their sustainability threshold, and the inshore trawl fishery is considered an important contributor to risk for this species.  The installation of on-board camera monitoring for some sectors of the fleet (phased in from 1 October 2018) will likely assist in better estimating the extent of interactions between marine mammals and inshore trawl vessels.

The results from the New Zealand Marine Mammal Risk Assessment can be found here.

The Fisheries Act 1996 (the Act) and subsequent amendments provide a binding legislative and legal framework for delivering the objectives of Components 1 and 2.  Sections 10, 11, and 12 of the Act establish the requirements for the decision-making process, and Section 10 further requires the use of the best available information for all decisions. The Act requirement for best available information leads to scientific evaluation in advance of decisions. The Act further requires consultation with such persons or organisations as the Minister considers are representative of those classes of persons having an interest in the stock or the effects of fishing on the aquatic environment in the area concerned including Maori, environmental, commercial, and recreational interests.

While objectives broadly consistent with Components 1 and 2 are specified in the Act and Fisheries 2030 and are therefore implicit in the fishery specific management system, it is not clear that explicit short and long term objectives for inshore trawl fisheries are in place at this stage.  Nevertheless, the fishery management system is subject to regular internal review through the fisheries Plenary reporting process and decision making is guided by the Harvest Strategy Standard.  The Ministry for Primary Industries implements a comprehensive peer-review process for all scientific research that is used to inform fisheries management decisions.

It is clear that sanctions to deal with non-compliance exist for a range of offences, and these sanctions are regularly applied by the Ministry for Primary Industries. The Ministry operates a comprehensive monitoring control and surveillance system including:

In addition, the Ministry has a fishery outreach programme of informed and assisted compliance, in which enforcement agents work with the industry in a proactive way to ensure understanding of regulations and to prevent infractions.  In combination with at-sea and air surveillance supported by the New Zealand joint forces, vessel activity can be monitored and verified to ensure compliance with regulations and with industry-agreed codes of practice.

The outlook below provides a qualitative judgment about the likely future performance of the fishery against the relevant risk assessment criteria over the short to medium term (0-3 years).  Assessments are based on the available information for the species and take into account any known management changes.